November 27, 2014 – Thanksgiving Day 5k races have become the rage in recent years, and Leigh Anne and I decided to give in to the trend by doing the Turkey Day 5k in Martinsville.  We generally travel to her parents’ home outside of Martinsville for Thanksgiving, so we’d have grandparents as babysitters.  Plus, we’d work up an appetite and work off some calories prior to Thanksgiving lunch and dinner.  All around, a cant’ lose scenario.

Thanksgiving morning was not abnormally cold, but rain showers were in the area.  I watched the radar map all morning, and it appeared as though we might get a hiatus from the rain during the race.  I had finally gotten accustomed to running in cold temperatures, but I hate being cold AND wet.  I doubt that will ever change. 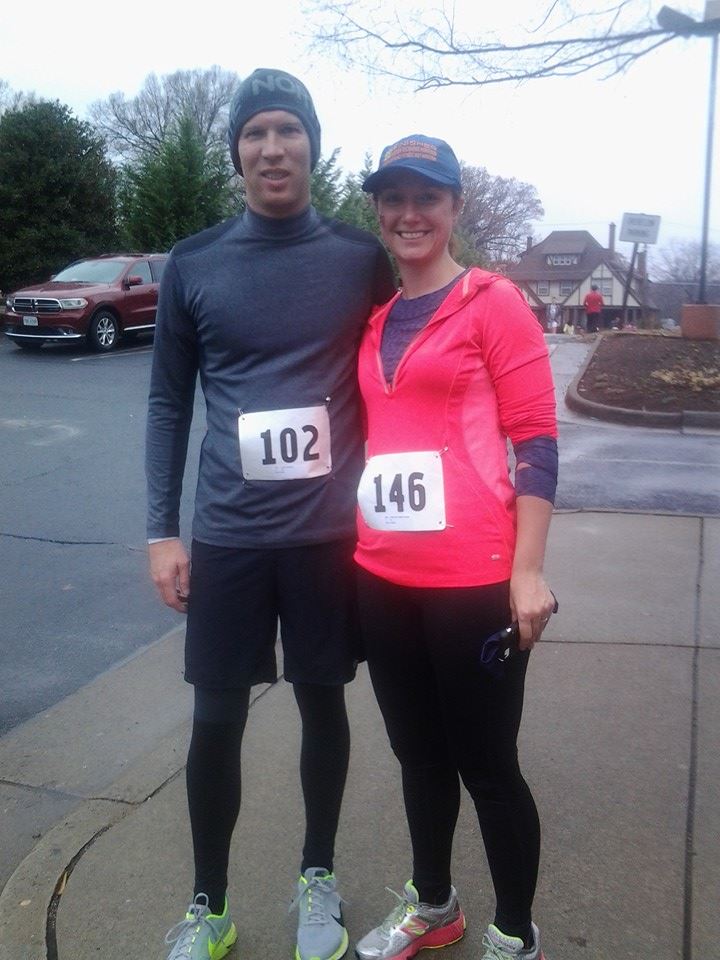 Leigh Anne was fresh off her first half marathon and was proudly sporting her stylish finisher’s hat.

The race was being held at the Martinsville YMCA, and we arrived an hour early since I am mildly neurotic about being late or rushed.  I tend to stress a bit in the 24 hours leading up to a race, and I generally arrive way to early since I don’t want to the stress of clock watching added to my pre-existing stress.  Thankfully, we did not have to wait outside in the cold and light rain.  In fact, the YMCA had an indoor track above and around the basketball court, which was useful for warming up.

A few minutes prior to the start time, everyone filed outside and lined up in the street.  After the National Anthem and a few words from the starter, the air horn sounded and we were off.

I did not have a major time goal for the race, but anticipated something the in 7-8 minute/mile pace range.  I positioned myself near the front, but was careful to stay behind the people who looked like “real” runners.  Some were easy to pick out since they were wearing shorts and tank tops, irrespective of the cold and wet conditions.

I had studied the course map ahead of time, but was unable to find an elevation profile.  Martinsville is fairly hilly, but I certainly did not expect what awaited me.  The first half mile was a mild downslope on the public streets, which led to a pretty fast pace.  We then entered a paved running trail, and there was a very steep descent for the next .2 miles.  In fact, the descent was so steep that I was forced to slow myself and brace so I wouldn’t slip on the wet asphalt.  Sadly, I was unable to fully exploit that portion of the downhill without risking an injury, and pretty much everyone else was doing the same.

As they say, what goes down must go back up (I think?), and from mile .7 to mile 1.45 there was a lung and leg busting trek back uphill.  Based upon my GPS data from the 2015 race, the course gained exactly 100 feet over that distance, which is an average grade of 2.5%, and which slowed my pace considerably.  In fact, I ran the first mile in 7:15 and the second mile in about 8:15.

The last half of the 5k was up and down, but there was only 90 feet of elevation gain over that distance.  My legs slowly recovered from the climbing, and I began to increase my pace.  The back half of the course wound around downtown Martinsville, and gave the runners a chance to see who was ahead and behind them.  I saw Leigh Anne at one point around mile 2, and she was just finishing her uphill climb near the race mid-point.

After finding my stride again, mile 2 – 2.6 went by pretty quickly, but the last half mile of the 5k is a straight shot down E. Church Street that seemed to go on forever.  To make matters worse, the last .3 miles were all uphill, with the finish line just beyond the crest of the hill.  Thus, you could not see the actual finish line until you were within a few feet of it, and I was not 100% sure how far beyond the crest of the hill it was.  Thus, I had trouble pacing myself at the end, not wanting to go all out too soon for fearing of bonking 100 yards before the line.

After what seemed like an eternity on E. Church Street, I finally crested the hill and saw the giant inflatable turkey marking the finish line.  I’ve never been so happy to see an inflatable turkey, and I crossed the finish line and tried to catch my breath.  A few minutes later, Leigh Anne came through, and then we waited for the awards ceremony to start in the YMCA to see if either of us managed to obtain a podium spot.

As it turned out, she and I both came in second for our age groups, which was my first ever podium finish in a race.  Granted, the Martinsville Turkey Day 5k is not as competitive as the Monument Avenue 10k, but I was 2/7 in my age group and 26/305 overall.  Sadly, it was not good enough for a large cash prize, but it did net me a photo with a couple of llamas and a wooden carving board that I’ve never used.  I guess I should be thankful for the small things… 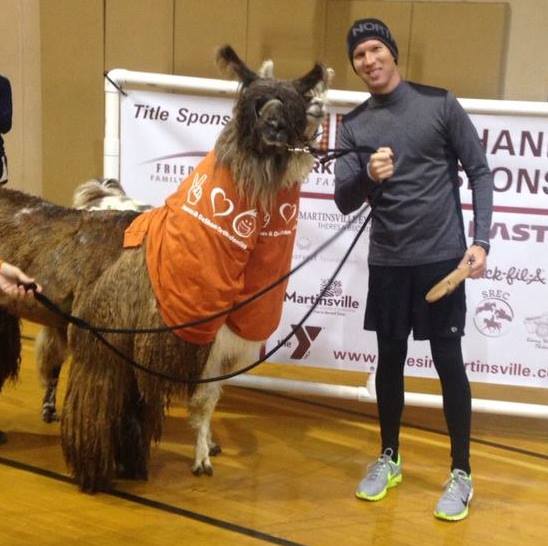 So that’s how my 2014 racing season ended, and I guess you could almost say that it came full circle.  My first triathlon had me chasing a chicken and my final race of the year had me posing with llamas at the finish.  The offseason would be spent preparing for my first half-Ironman triathlon in Raleigh in May 2015. 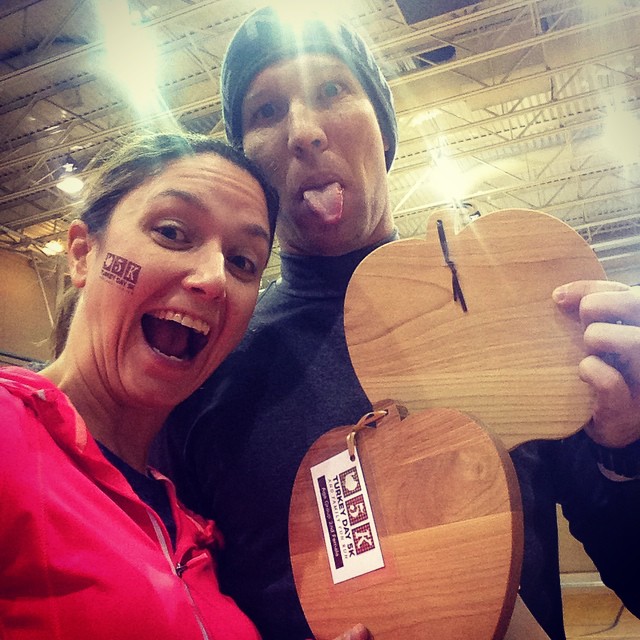