After returning from our vacation in Seattle on July 4th, the big build in my training for Ironman Chattanooga began in earnest.  There was no easing back into the training regimen, and I had a 2.5 hour bike on Saturday followed by a 13+ mile run on Sunday.  The real fun started the next weekend, however, when Busher and I drove to Lewisburg, West Virginia for an organized bike ride – Wheels of Hope.

There were several routes to choose from – a 19 mile red route, a 36 mile green route or combinations thereof.  The big draw for us was the elevation gain, which was about 3000 feet on the green loop.  The route wasn’t really suited for a tri bike with 11-25 gearing, but Karen wanted me to ride my Cervelo instead of my old road bike to make it more difficult.  The moment I inquired about the wisdom of the tri bike selection, she responded with, “I’ve ridden bigger hills that than on harder gearing!”  Ha ha, she knows how to shame me and get me going.

Busher and I drove to West Virginia on Friday night and settled into the luxurious Super 8.  He’d asked me if I was a hotel snob, and I’d answered “no” without inquiring into the details.  I knew that we might be in trouble when we arrived to find the receptionist outside smoking on the entryway landing, surrounded by about four guys in lawn chairs who were on the tail end of a 30 pack of Bud Light.  We managed to survive the night, but I ended up with an eye infection that made the next day’s 75 miles feel longer than they were. 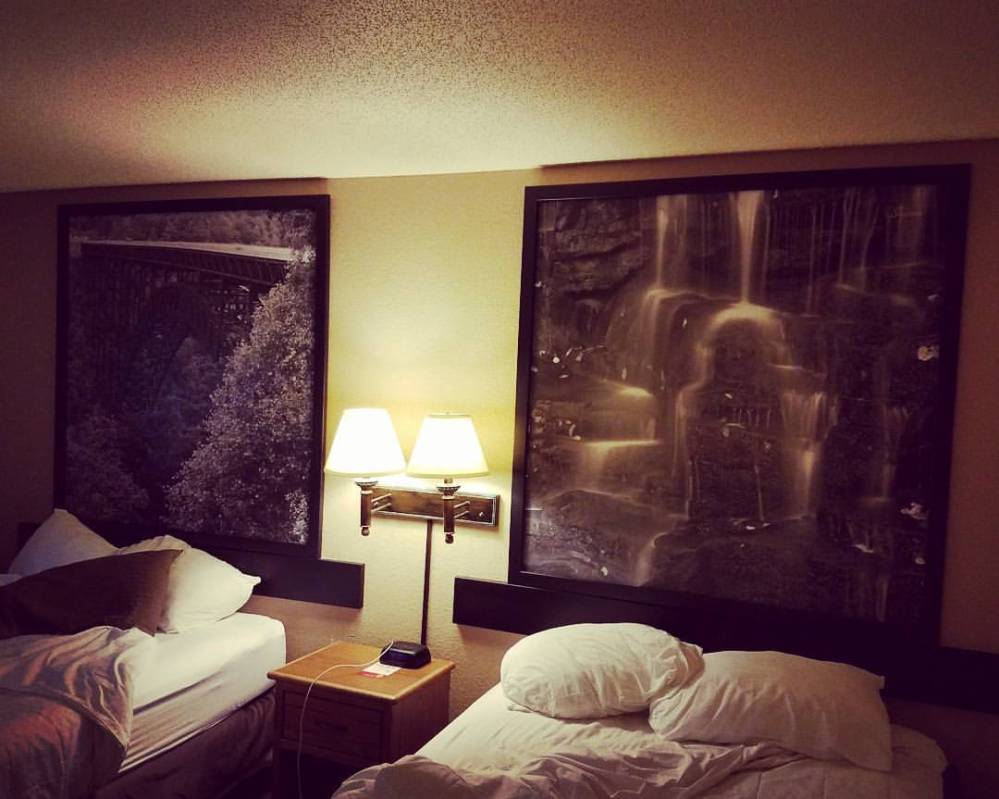 Serenity of the Super 8 in Lewisburg, WV.

The start of the ride was only a couple of miles away from the motel, and when we arrived, I was the only fool on a tri bike.  Busher and I quickly became known as the “tri guys,” and we set off on the green loop, which we planned on riding three times.  There weren’t many flat parts of the ride, and I was probably only laying in the aero bars 10% of the time.  A tri bike isn’t meant to be ridden while sitting up like a road bike, and by the time we hit the green loop for a second time my hands were getting sore. I’d also ejected three water bottles off the back of my bike by that point, and I made a mental note to buy some Gorilla cages before IM Chattanooga.

Busher and I handled loop one pretty well, but we both began running out of steam on loop two.  I think we were two of only about four people to attempt the green loop twice, and by the time we neared the end, neither of us felt like trying it for a third time.  It was getting late in the day and we still had a fairly long drive back home.  Busher seemed to be feeling a bit worse though, and dry heaved twice in the last ten miles.  After we were done, we both did a quick transition run and then headed back to Richmond.  I made it home around 8 p.m., but then had to get up early the next morning for a 2.5 hour run, which was no fun at all.  My quads were pretty much blasted from the bike ride, so I actually had to do some walking on the uphill portions. I averaged 11 hour training weeks in July after getting back from vacation, and we continued building into August.  Your body gets used to it after a while, but I was still pretty tired most of the time.  My first 100 mile ride of the year was set for Saturday August 19th, and I planned to ride the Capital Trail down to Williamsburg to stay off the public roads and away from traffic.  I set out at first light and had no issues in getting to Williamsburg.  I ran out of trail and still needed some more mileage before turning back towards Richmond, so I set off down the Colonial Parkway near Jamestown.

The Colonial Parkway is essentially three lanes of poured aggregate, and there are 1 inch wide gaps between the lanes.  I was mindful of the gaps at first, and after riding a few miles down the Parkway, I turned around  to head back towards the Jamestown visitors center so I could hit the restroom and refill my water bottles.

Shortly after turning around I got behind a couple on fat tire bikes.  I passed them on their left at about 20 miles per hour, and as I moved back to my right my front wheel went directly into the gap between the lanes.  I immediately went out of control and my bike darted towards the middle of the road.  Luckily, it then turned hard in the other direction and headed towards the right shoulder.  Upon reaching the shoulder, the bike jacknifed and sent me flying over the left front of the handlebars.  That entire process probably lasted 1-2 seconds, but it seemed like an eternity.  I had zero control of the bike or my body during that time, and it was pretty terrifying.

I landed hard in muddy grass on my left shoulder and then came down on my left side.  A bottle of sunscreen was in my left jersey pocket, which left a nice mark above my left hip.  After landing, I was staring straight up into the sky and had no idea where my bike had ended up.  It was presumably trashed, and I heard the people I had just passed yelling at me and saying, “Are you okay, don’t move?”  I’m sure I gave them quite a show. 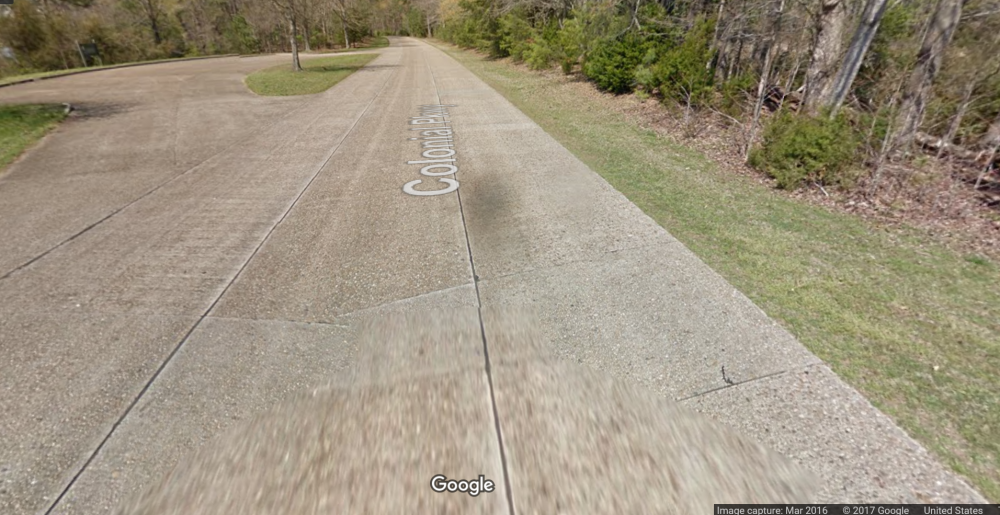 I hate those grooves, but I’m thankful for the grassy shoulder.

At that point, I didn’t know the extent to which I might be injured and I laid there for a few seconds assessing the situation.  I finally sat up and saw the lady picking my bike up out of the mud and her husband was picking up the rest of my gear.  Pretty much everything (but the sunscreen and the water bottles in my new Gorilla cages) had flown off of me and my bike, including my cell phone, my extra bag of Carbopro and my sunglasses.  I realized that I had been knocked half-silly, but I didn’t seem to have any major injuries.  My bike was completely covered in mud and the chain had come off, but it also seemed to be in working order.

After about five minutes of getting myself together, I was able to ride a mile or two to the Jamestown bathroom where I cleaned up some more and called Leigh Anne to let her know what had happened.  I still had 40 miles to go to get back to my car, and felt like I could make it back.  I had really dodged a bullet, and if I’d have landed on the road instead of the grass I’d have broken several bones in my left shoulder area and IM Chattanooga would have been a no-go.  Adrenalin got me back to my car, and I even managed to do my transition run.

I was pretty sore for the next few days and I really wanted to cancel my long run the next morning.  I was in pain during the run, but not enough to justify canceling it.  There is pain where you worry about causing (or exacerbating) an injury, and pain that just makes you feel like shit that you just have to push through.  This was the latter.  I told Karen that I wanted a nickname other than “Big Baby” for completing my 100 miles after crashing and then my long run the next day, but sadly, the name had already stuck.  By this point, I fear it might be permanent.

Even though my bike had also been saved by landing in the muddy grass, like me, it didn’t come through the ordeal completely unscathed.  The bottom bracket had broken, and I had to take it to the shop for some repairs.  Karen and Erin set me up for another 100 mile ride the following weekend, and thankfully, that ride was uneventful.  I did the first two hours solo, and then did the rest with Busher   That ride was followed by another 2.5 hour run on Sunday morning,

August of 2017 was the biggest training month for me since I started my Ironman journey, and I logged 51.26 hours over that period of time.  That was tough to handle on top of my other responsibilities, and as always, I did my best to get my training done when it didn’t interfere with anything else.  At that volume, however, there just aren’t enough hours in the day to avoid all of the conflicts, so it takes an understanding family to train for an Ironman. Your body mostly adapts to the punishment, but after a while the constant training and the early mornings wear on you.  Mental fatigue dovetails with the physical fatigue, and there comes a point when you are just over the training and dying to get to the starting line.  There were a few times when I had to find motivation by reminding myself that I was lucky to be healthy enough to do what I was doing.  I’m not getting any younger, so my window of opportunity to do these things can close fast.

By the end of August, my taper finally began for my final pre-Ironman race on September 9th.  That was the Patriot’s Half triathlon, which was only two weeks before IM Chattanooga.  Due to the short turnaround, the Patriot’s Half was going to be treated as a long training day instead of a full-out race effort – particularly the run.  So, as I entered my taper, my energy levels started to return and the constant soreness in my legs began to dissipate.  The light at the end of the tunnel was finally getting brighter, and I was ready to see the fruits of my labors from the preceding months.