November 28, 2019 – The Turkey Day 5k in Martinsville is one of my favorite races of the year, particularly since we make a family event out of it.  For years now, all four of us have run the 5k and then we hit up the local Biscuitville after the race.  Honestly, I think Jackson loves the event just because its the one day a year he gets a red velvet chocolate chip muffin.  After Ironman Louisville just about did me in on October 13, 2019, I needed a more lighthearted event, so I was really looking forward to the 5k.

I’d had a routine dermatology appointment the week after Louisville, where a spot on my right shoulder had to be cut off and biopsied.  That’s pretty routine for me since I had malignant melanoma on my neck in 2006, but I got a call from my doctor on October 22nd, and she told me that I had it again.  This time around, they were going to have to do surgery under general anesthesia so they could remove a lymph node under my arm and biopsy it to see if the cancer had spread.  If it had, then the future was pretty uncertain.  If you Google “melanoma and bloodstream,” you’ll see that those two things don’t go together very well.  Well actually, the problem just might be that they go together a little too well.

Its pretty sobering to visit a surgical oncologist at the Massey Cancer Center at VCU.   Of course I looked completely healthy, and was a stark contrast to most of the other patients I saw there, many of whom were older or visibly sick.  I can’t say that my surgeon had the greatest bedside manner, so that didn’t really help allay any of my fears.  Since I was still experiencing the post-Ironman blues, and since everything moving forward health-wise would be uncertain until after the surgery in December, I can’t say that I was in a great place mentally.  Thus, my training and motivation pretty much fell off of a cliff.

Anyways, that’s my long round-about way of saying that I hadn’t trained much since Louisville, so I wasn’t in top shape and was over race weight.  Still, by the time we rolled into Martinsville the day before Thanksgiving, I was excited just to be racing, and was looking at each day moving forward as a blessing.  After the initial shock had worn off, I’d made peace with the situation during a bike ride in late October and was prepared for whatever came next.  If you know me at all, then you know that’s not my typical mindset since I’m a glass half-empty type of person.  Still, I really was just happy to be racing.  Its easy to let training (and even races) seem like a chore sometimes, and to take it all for granted.  I figured that I might have 1 race or 100 in my future, but I was going to savor every moment of this one.

The course is super hilly, and really isn’t conducive to a PR if you run a lot of 5ks.  Its all downhill at the start, and then the back half of the first mile is all uphill on a paved trail.  From past experience, I know that I have to go out fast and make good time in mile 1 if I’m going to have a fast race, because mile 2 sucks.  I took off at the gun and felt like I was making pretty good time.  You run a few blocks around the YMCA, and then head down onto the trail.  There’s a bridge that’s pretty slippery, so you have to be careful not to fall.

Around the .7 mile mark I started going uphill, and I tried to keep running hard, but I knew that I needed to pace myself since it was all uphill until about the 1.5 mile mark.  I was feeling pretty good, all things considered, but I knew that I wasn’t quite as quick as the year before.

Mile 2 is the worst, and after getting off the trail, you take a left and head up a steep climb on Franklin Street.  I could definitely tell that I wasn’t in top form, and I was getting tired a lot quicker than in years past.  There is a bit of a respite after passing the 1.5 mile mark, but the course is nothing but up and down from there.  There really aren’t any flat parts.  I kept chugging along, but I was struggling pretty hard and was worrying about blowing up.

Mile 3 is all rolling hills, and I was able to recover a bit and put together a solid finishing mile.  I tried to let gravity do its magic on the downhills and then I pushed as hard as I could on the uphills.  The course finishes with a climb of about .3 miles, and the finish line is just beyond the crest of a hill, so you really can’t see it or hear it until you’re right on it.  I felt like my legs and lungs were about to explode at the line, and came across in 22:06.  I’d finished in 21:41 in 2018 (my 5k PR), so I was only 25 seconds slower in 2019.  I’d take that for sure.

After I finished, I circled back and to check on Leigh Anne and the kids, and I found Jackson and ran with him to the finish.  Leigh Anne ended up finishing third overall female, and Jillian was first in her age group.  Jackson was in a competitive age group and didn’t medal, but he finished with a smile on his face and qualified for Biscuitville, so he was happy.

My surgery was scheduled for December 11th, but for the time being, I was going to try to put that out of my mind and focus on the present, which was pretty good. 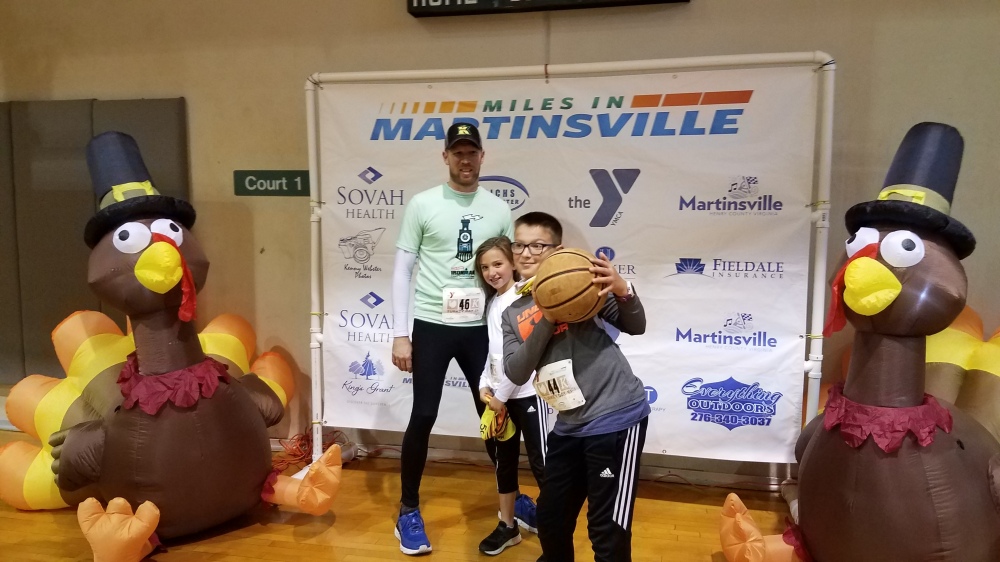