May 2016 – Its less than five months before Ironman Maryland and I’ve decided to make a big change to my training regimen by purchasing coaching services.  My buddy Chris Busher had been training with Karen Holloway of ProK Racing for some time, and he’d been encouraging me to come on board.  I’d met Karen the weekend before Ironman Raleigh 70.3 in May 2015, and she was kind enough to give me some last minute advice.  I’d been getting second-hand training advice from Busher, but as informative as that was, it was no substitute for input directly from Karen, who just happens to be the 2005 Ironman Canada female champion.

I didn’t realize it at the time, but I’d actually be getting two coaches for the price of one.  Karen had partnered with Erin Wittwer, who runs Sweet Spot Cycling out of the Richmond Bicycle Studio near The Diamond.  Erin has a cycling background, and she and Karen offer triathlon coaching services together.  Via the Trainingpeaks website, they would input my workouts for the week, so all I had to do was get my butt out of bed and go do them.  No mental gymnastics were necessary on my part as to what I needed to do, when I needed to do it, how hard I needed to do it or how long I needed to do it for.

My new age of training began immediately after the 2016 Powersprint Triathlon, and two things became apparent to me quickly.  The first was that I thought that I had been training hard – I was mistaken.  My swim/bike/run training volume went from 4-6 hours/week on average to 7-9 hours/week in short order.  That may not seem like a big jump, but when you have a full time job and have two kids (with their own activities), it’s a fairly big adjustment.  My first three weeks on the program left me chronically tired, hungry and quick-tempered.  Leigh Anne claimed that I was constantly “hangry,” which is some combination of hungry and angry.

The second thing I noticed was that I had been training all wrong and putting in too many “junk miles.”  When I swam, I’d go to the pool and swim a non-stop 2000-2500 yards.  I’d bike on the trainer at a constant wattage most of the time, and when I ran, there were no pace changes – I’d pick a pace and run that pace from start to finish.  Sure, there were some exceptions, but not many.  I was also doing most of my runs in the “bullshit” zone that is moderately hard, but not super hard.  There was also a semi-neurotic avoidance of easy workouts since I thought those were worthless.  I mean, what’s the purpose of running 10-12 minute miles if you can run 7-8 minute miles?  All that does is make you look slow to your friends on Mapmyrun and Garmin Connect, right?

My calendar was quickly filled with “super easy” aerobic runs, followed by fartleks a couple of days later.  There were also “recovery” spins and then “Sweet Spot” interval sessions that made me want to quit halfway through.  Straight swim sessions were replaced by programs that took me a half sheet of notebook paper to write out.  There were pull sessions, drills, build intervals and a bunch of other stuff that I’d never heard of before.  Some of it I figured out.  Some of it I faked until I built up enough courage to text Karen that I had no idea what I was doing so that she could enlighten me.

While the infinite wisdom that was being passed onto me was helpful, another important part was the accountability factor that inevitability comes with people looking over your shoulder.  When I was training on my own, I had an informal plan of what I wanted to accomplish in any given week.  If life intervened, like say, an impromptu happy hour session on a Wednesday, Thursday could simply be turned into a rest day.  With Karen, Erin and Trainingpeaks, however, a missed workout was like a glaring red badge of failure hanging out there in cyberspace.

When you complete a scheduled workout, Trainingpeaks turns it green on your training website.  When you complete 50-80% of the workout, it turns yellow, warning you of the impending wrath of your coaches for slacking.  When you complete less than 50%, it turns red – shaming you into coming up with some half-assed excuse as to why you’re not a total failure and an embarrassment to said coaches.  Ok, perhaps I tend to exaggerate the colors, but that’s pretty much how I see them.  Karen and Erin actually understand that life gets in the way of training sometimes, but I try to avoid anything on my website other than green like the plague.  The upside, however, is that there have been many cold, dark mornings when I’ve wanted to sleep in, but the fear of a yellow or red mark on Trainingpeaks has ripped me out of bed and into my prescribed workout. 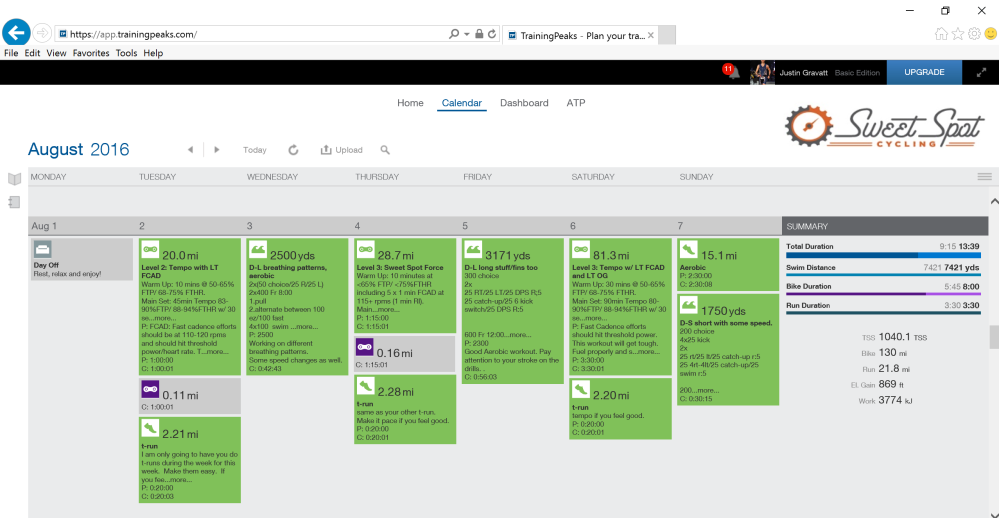 In actuality, it was my wife who encouraged me to sign up for the coaching.  I was willing to trudge on towards Ironman Maryland in my blissful ignorance, alone and relying largely upon training tips extracted from Busher and Google.  Triathlon is an expensive sport, and I was somewhat reluctant to spend even more money on the (assumed) intangible benefits of coaching.  Perhaps, Leigh Anne just didn’t want me to die on the course, or perhaps she just wanted me to succeed beyond my own expectations.  I’m not quite sure of the answer to that question, but she did repeatedly ask whether the life insurance premiums had been paid.

So, in May of 2016 I finally relented and signed up for a triathlon coaching package.  The decision ultimately proved to be a good one, and over time, the benefits would manifest themselves in my race results.