Thursday, September 29, 2016 – I’m packed for Ironman Maryland (“IMMD”) and on the road to Cambridge with the family by 7:30 a.m.  Its overcast and rainy, and its been raining pretty heavily in Richmond for two days.  More importantly, the forecast in Cambridge through race day (Saturday, October 1st) is nothing but wind and rain.  The AccuWeather outlook even includes the possibility of thunder storms.  I’m not worried about myself per se – I’m really worried about a possible cancellation, along with the discomfort of my familial spectators over the course of a 12-hour day.  In fact, the 2015 version of IMMD was postponed several weeks due to adverse weather and then the swim had to be shortened due to rough conditions in the Choptank River.  Preparing for your first Ironman is stressful enough without obsessing over weather reports every few hours.

I’d reserved one room at the Day’s Inn on Thursday, and two rooms for Friday and Saturday.  Those were booked a year in advance since there aren’t a ton of hotel rooms in Cambridge.  My friend, Chris Busher, had decided at the last minute to partake in IMMD, but online registration had closed by the time he was ready to commit to the race.  It was our understanding that the race hadn’t sold out, but we weren’t 100% sure and couldn’t get confirmation from the race officials.  Thus, Busher was going to drive up separately on Thursday and try his luck at walk up registration.  If he couldn’t get into the race, he was either going to drive back home or stay with us and spectate.

The drive from Chesterfield was uneventful, but the wind was blowing pretty good and there were intermittent periods of rain showers.  My first order of business upon arriving at the race site was checking in at the Ironman Village, whereas there was no check in on Friday.  I’d actually lost sleep worrying about having car trouble on Thursday and missing the check in deadline since I’m an eternal pessimist!  Leigh Anne dropped me off near Ironman Village once we pulled into town, and within twenty minutes I had my race package and a nice backpack (that was included with the entry fee).  I took a quick peek at the Choptank River, and was a bit dismayed to see the choppy conditions.  It looked nothing like the glassy smooth surface in the picture below, which was taken the day before.

Ironman Village in the calm before the storm on Wednesday….literally and figuratively.

After completing check in, we drove a few blocks into the downtown area and stopped in for lunch at the Rock Lobstah.  I’d never had a lobster roll before and was determined to have a couple, even though there were some familial concerns about the fact that they might be too “heavy” to eat before a race.  Knowing that I still had Friday to recover if they gave me any issues, I went ahead and bit the bullet and was glad that I did.

Conditions on the Choptank upon our arrival in Cambridge.

Upon finishing lunch, we made our way to the Day’s Inn and checked in there.  I’ll say that the accommodations were borderline satisfactory, and certainly nothing special.  There was no elevator, and when we entered the stairwell to go to our room on the second floor, there was a lit candle sitting on a chair in the landing.  I’m pretty sure that wouldn’t have been in compliance with Virginia’s fire code, but as for Maryland’s, who knows.  Either way, Leigh Anne and my mom were convinced that we were going to die in a motel fire.  The Day’s Inn staff was very nice though.

Busher arrived in Cambridge an hour or so after we did and was lucky enough to grab walkup registration spot.  Interestingly, he decided to play dumb, and asked the sign up ladies what was going on.  When they tried to explain that it was a full Ironman triathlon, he replied that it “sounded fun,” and maybe he should give it a try.  After all, he rides bikes with his kids and does Aqua Zumba.  Upon handing over his credit card, he elicited some dumbfounded looks, but the ladies realized they’d been had when he presented them with his USAT card.  Touche Busher.

Somehow he’d also managed to get a room at the America’s Best Value Inn, which was only a few blocks from the Day’s Inn.  I was originally planning to stay with him on Thursday night to give my family a bit more space in our room, and then he would move over to the Day’s Inn on Friday and Saturday since we’d have two rooms then.  Nevertheless, after seeing some pictures of his accommodations that he texted me after he checked in, Leigh Anne forbid me to stay the night there.  Interestingly, the indoor “pool” had been totally concreted in and it was adjacent to a liquor store.

No warm up laps to be had here.

Thursday evening was spent at the Ironman welcoming party, but the weather outside continued to deteriorate.  The wind was picking up, and the party was right next to the Choptank River, which was looking pretty treacherous.  My mom is always concerned when I participate in races with open water swims, and I think she was about to have a heart attack watching the waves on the river.  She was definitely hoping for a swim cancellation.

After breakfast on Friday morning, Busher and I rode our bikes from the Day’s Inn to the transition area in order to rack them for the race.  On the way there, we had to ride over a small bridge with grates in it.  My front tire went down into the grate and my bike shifted pretty violently, but quickly righted itself.  It was one of those “pucker” moments, but thankfully I didn’t crash the day before the race.

When we got to the transition area the wind was blowing really hard, and due to our rear disc wheels (technically – mine is a disc cover), our bikes kept blowing off of the racks.  The discs were just catching too much wind.  My stress level went up a bit thinking about my bike blowing onto the asphalt and laying there all night, but we managed to find a bike mechanic who had some zip ties.  Two zip ties were able to keep the bikes from twisting and blowing off, and Busher and I made mental notes to remember to bring something with us on race morning that we could use to cut the zip ties off with.  It would be quite the conundrum to get out of the water, only to be unable to remove my bike from the rack.  After getting our bikes squared away, we took a moment to pose next to the IMMD sign.  I also snapped a picture of the Lexus “Official Vehicle” of IMMD for posterity. 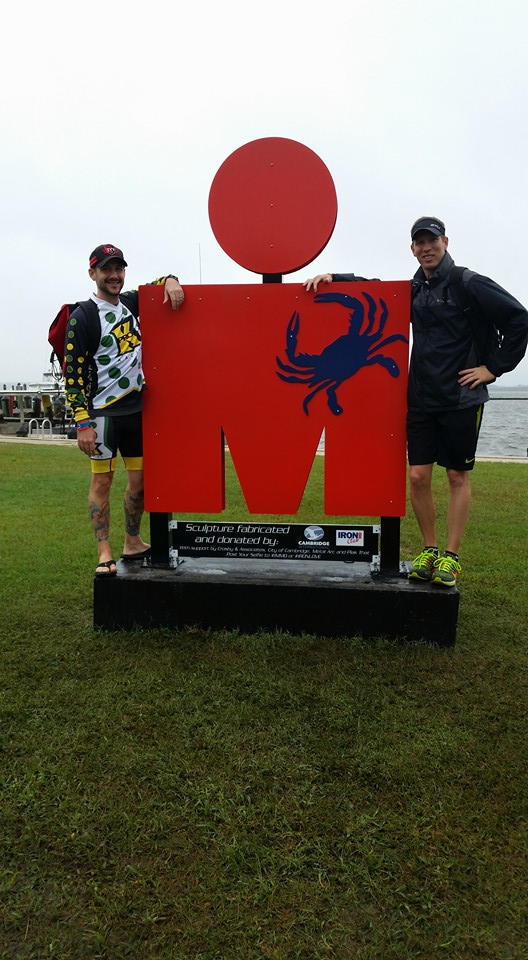 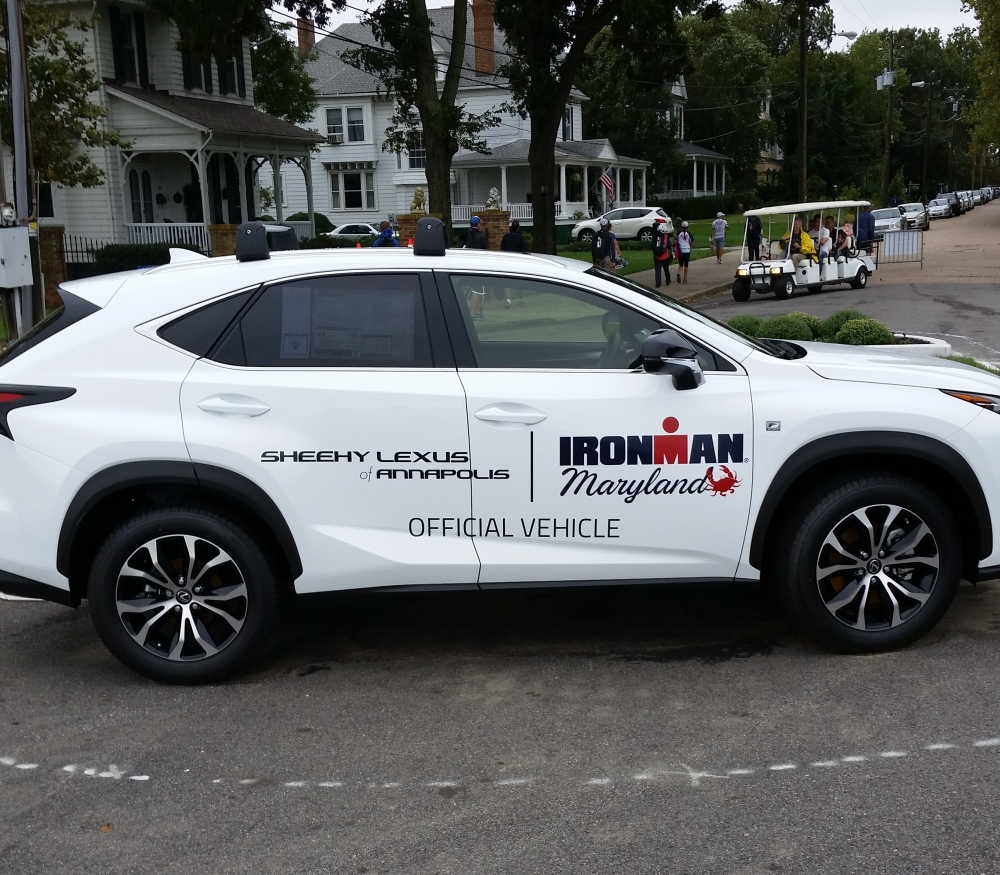 For me, the rest of the day was spent relaxing with the family and watching as my kids went bowling.  Busher decided to do a pre-swim in the river with his wetsuit, and got beaten half to death by the wind and the waves.  Since the weather wasn’t supposed to change, we were pretty concerned that the swim would either be cancelled, or would turn into a situation where a good portion of the field had to be fished out of the river for a DNF.

To make matters worse, the IMMD Facebook page began to fill with photos of massive flooding on the bike course – courtesy of racers who decided to drive the bike course that afternoon.  I’m not talking about an inch or two of water, it was more like a foot of standing water.  After monitoring the Facebook page for an hour or so, we learned that the 112 mile course was being rerouted and would be shortened to 106 miles.  There was nothing that the race coordinators could do, but I was disappointed that I wouldn’t be getting the 140.6 miles of a full Ironman.  I was starting to feel a little bit robbed, and was further concerned that the swim might be cancelled altogether.

Busher and I talked to coach Karen that night over the phone and she told us not to stress about the shortened course.  Take it as it came, and when I was done, I’d still be an Ironman.  I understood where she was coming from, but I’d been training a long time to take on 140.6 miles and felt like I’d have to equivocate every time someone asked me if I’d done a full Ironman.  I tried to set aside the negativity, and focused on double-checking my gear and in making my two 900 calorie bottles of CarboPro for the bike.

So….with my nutrition bottles safely stored and cooling in the mini-fridge, it was lights out around 9:30 p.m. to try to get some sleep before the alarm went off around 4:00 a.m.  In actuality, there were several alarms set, which included cell phone alarms and a wake up call from the front desk.  I might not get my full 140.6 miles, but I sure as hell wasn’t going to oversleep and miss the race.  That was one thing that I still had control over.