September 21, 2017 – After nearly twelve months of waiting and training since the flood-shortened Ironman Maryland on October 1, 2016, its finally time to hit the road to  Ironman Chattanooga.  The race was on Sunday, September 24th, but we were leaving on Thursday in order to have plenty of time before the race to get checked in and situated.  There was a mandatory check in by 5:00 p.m. on Friday, and since we had an eight hour drive, I didn’t want to take a chance of missing the cutoff if we left Friday morning and had car trouble.  Thus, after dropping off Jackson and Jillian at daycare on Thursday morning, Leigh Anne and I set out for Chattanooga.

Ready to roll to Chattanooga.

After a few stops, we rolled into Chattanooga around 4:30 p.m. and had just enough time to park and get into the Ironman Village and get checked in.  I could have waited until Friday morning, but it was good to get it done and mark it off my “to-do” list.  I pretty much walked right up to the table and had my gear bags and race numbers in no time.  Then it was off to the Marriott about a mile up the road to check in there.

On Friday morning, Leigh Anne and I decided to ride a portion of the bike course, and  we drove out of town and parked at the Dollar General that was near the end of the “stick” of the “lollipop” bike course.  There were a fair amount of other people doing the same thing, and lots of cyclists were on Highway 193.  Unfortunately, there were lots of cars too, which was making Leigh Anne pretty nervous since she was still getting used to riding the road bike.  We did about 13 easy miles and then called it quits.  We then drove the rest of the bike course so that I would know what I was in for on Sunday.

Overall, the course didn’t look too bad, but there were lots of rolling hills.  None of the hills looked terribly tough on an individual basis, but I’d read about the climb at the bottom of the loop just before turning left onto Hog Jowl Road.  That climb didn’t look like much in the car, and I wondered if I was looking at the correct hill.  Sometimes its hard to judge hills in a car though, so maybe I’d have a different impression of it on race day.

The second portion of the bike loop was more scenic than the first portion, but the rollers continued.  It was mostly downhill coming back in, but there was a long sustained climb after the 50 mile checkpoint in Chickamunga – followed by a screaming downhill portion to complete the loop.  The only other thing that stood out about the loop was a horrible smelling dead skunk in the road, which I hoped would be gone by Sunday.

We finished driving the bike course before lunch and pretty much had the rest of Friday to kill.  After seeing all of the signs for “Rock City” on Lookout Mountain while driving in on Thursday, we decided to check it out.  Rock City was pretty neat, but is hard to describe.  It was a weird combination of scenic views, caverns, gnomes and the “Its a Small World” ride from Disney World.

The one of the lookouts at Rock City.

I wasn’t looking to spend too much time on my feet, and thankfully we were able to walk through the entire site in about thirty minutes, then we had lunch at the restaurant near the scenic viewing area.  I also took a power nap on a bench while Leigh Anne explored the gift shop. 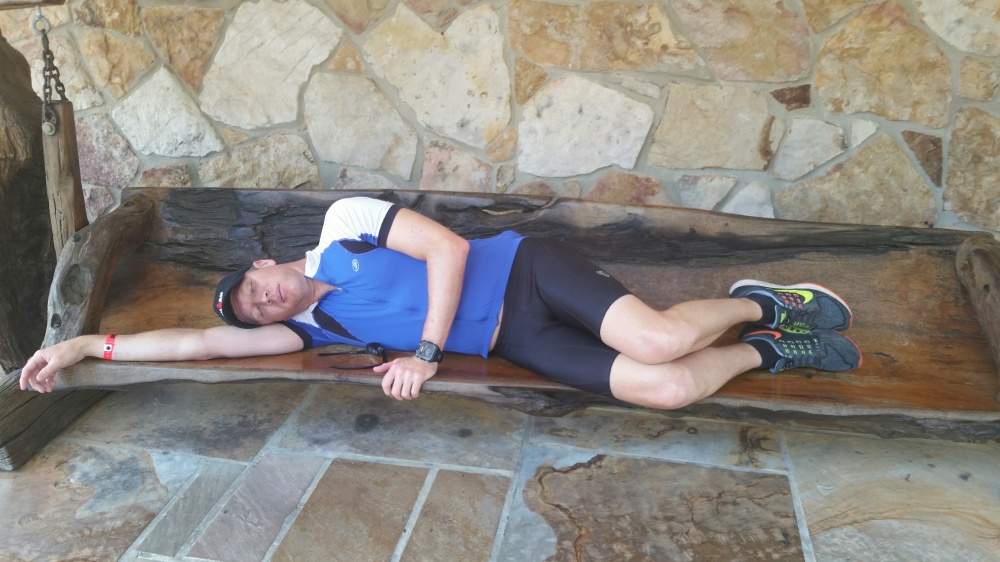 Looking back at Chattanooga.

We took the rest of the day to relax at the hotel, to attend the athlete briefing on the river and then to grab dinner out.  The restaurants were one of the best parts of Chattanooga.  As we passed through Ironman Village to go to the athlete briefing Friday afternoon I was really happy to have checked in on Thursday since the crowd was thick and the check in line was long.  It was sweltering hot, and the forecast was for Sunday to be even hotter.  I chose to skip the opening ceremony at the river on Friday night because I didn’t want to be out in the heat and humidity any more than necessary before the race.

Saturday morning began with me having severe muscle spasms in my neck, which caused me to go into total panic mode since I could barely turn my head.  Lets just say that I slept on it wrong.  I’ve had that issue a couple of times in the past, and its usually fixed by a few Flexeril and two of days of rest – neither of which I had in Chattanooga.  Leigh Anne ran out and bought me a tube of Biofreeze, and between that and some hot compresses, it loosened up enough for me to go try my pre-swim in the river.  I was still pretty freaked out though, about how I was going to sit in the  aero position for six hours on the bike the next day with a bad neck.

There was a park on the far side of the Tennessee River where you could park and walk down to the water.  Leigh Anne rode with me and was going to watch me swim, and then she was going to take off running and meet me back at the hotel.

New ProK kit…but not willing to wear it for the first time on race day.

The water was a near perfect temperature, and the views weren’t too bad either.  The only problem was the slippery rocks at the entry/exit point, which caused me to fall and bang my leg just below the knee.  It hurt, but wasn’t a problem for the race, thankfully.

Picturesque pre-swim…and inspired by the one-armed lady ahead of me.

I only planned to swim for ten minutes, and I took off up the river so I could ride the current back down.  It did hurt to turn my head due to my neck issues, but I was ABLE to turn my head, so that was the most important thing.  The current was noticeable but not super strong that morning, and it took me about 6.5 minutes to go up river and about 3.5 minutes to get back.  I felt good in the water, and after finishing my swim, I did a short run to shake out the legs for the last time.

When I got back to the hotel, I finished packing my bike and run bags, and made sure that my bike was in good working order.  I chose to go with one rear bottle cage instead of two, whereas I could have a single cage directly behind me.  When I was set up for two rear bottle cages, they each hang off to the side.  There would be a weight and an aero benefit to having just a single bottle cage in the back, and that would still give me a total capacity of three bottles when you factored in my aerobottle and the bottle at my shins.  Water would go in my aerobottle and 900 calories of Carbopro in each of the other two.  Once my first bottle of Carbopro ran dry around mile 58, I planned to grab the full one from behind me and then discard the empty bottle (at an aid station).  The aerobottle would be refilled with water at the aid stations, which were about 15 miles apart.  With two bottles of Carbopro on the bike, I wouldn’t have to stop at special needs to get the second bottle, saving time.

Once Leigh Anne got back from her run, we headed to Ironman Village yet again to check in my bike and my two gear bags.  It just so happened that I had a spot on the end of the bike rack, which would make finding my bike easy the next morning.  After a quick lunch, Leigh Anne set out to explore Ruby Falls and I went back to the hotel to put my feet up and to continue to work on loosening up my neck.  I took a hot bath with a whole bag of Epsom salts, which helped a bit.

End of the rack…must be a VIP.

I spent all afternoon just laying around and getting some last minute advice from Karen.  The race day weather looked like it was going to be 88 degrees and humid, and we discussed some last minute pacing strategy, particularly for the run.  We had planned on me running the first three miles at a 10:00 minute pace, and she suggested that I might want to consider bumping that up to 10:15 in light of the heat.

Leigh Anne and I had dinner at an Italian restaurant on the far side of the river Saturday night, which was also where the back half of the run course took place.  We took the opportunity to drive that portion of the run course, and I was a bit shocked when I saw the severity of the hills.  I knew the course was hilly and had looked at the course profile countless times, but sometimes it just doesn’t sink in completely until you see it first-hand.  Barton Avenue had a bad reputation since you run up it both ways on both loops, and it looked pretty nasty.  Oh well, I’m used to running the hills around my neighborhood, so hopefully I was ready for it.

Then it was back to the hotel to get some sleep before the alarm went off at 3:30 a.m.  I was scheduled to meet my buddy Danny Royce in the lobby of the Marriott around 4:00 a.m. so that we could carpool to the Ironman Village, so it was lights out by 9:00 p.m. after Leigh Anne applied my race number tattoos.  Unfortunately, sleep didn’t come easy.  There was the fear of sleeping through the countless alarms I’d set, coupled with the natural fear that Ironman races produce.  As much was I was on edge about the next day, the real challenge is getting to the Ironman starting line properly trained and injury and illness free.  That’s easier said than done, and although I’d battled some nagging injuries over the past two years, I was feeling good 10 hours from go time.  My neck wasn’t perfect, but had loosened up quite a bit over the past 14 hours.  It looked as though I’d made it, so all I needed to do was show up the next day and race.  After all of the blood, sweat and tears of training and preparing, that should be the easy part, right?